Sell
Help
Sign up/Sign in
The Queenly Blog
/
Pageantry Takes a Turn for Modern Times— and in 2021, You Have Accomplished Women of Color to Thank. 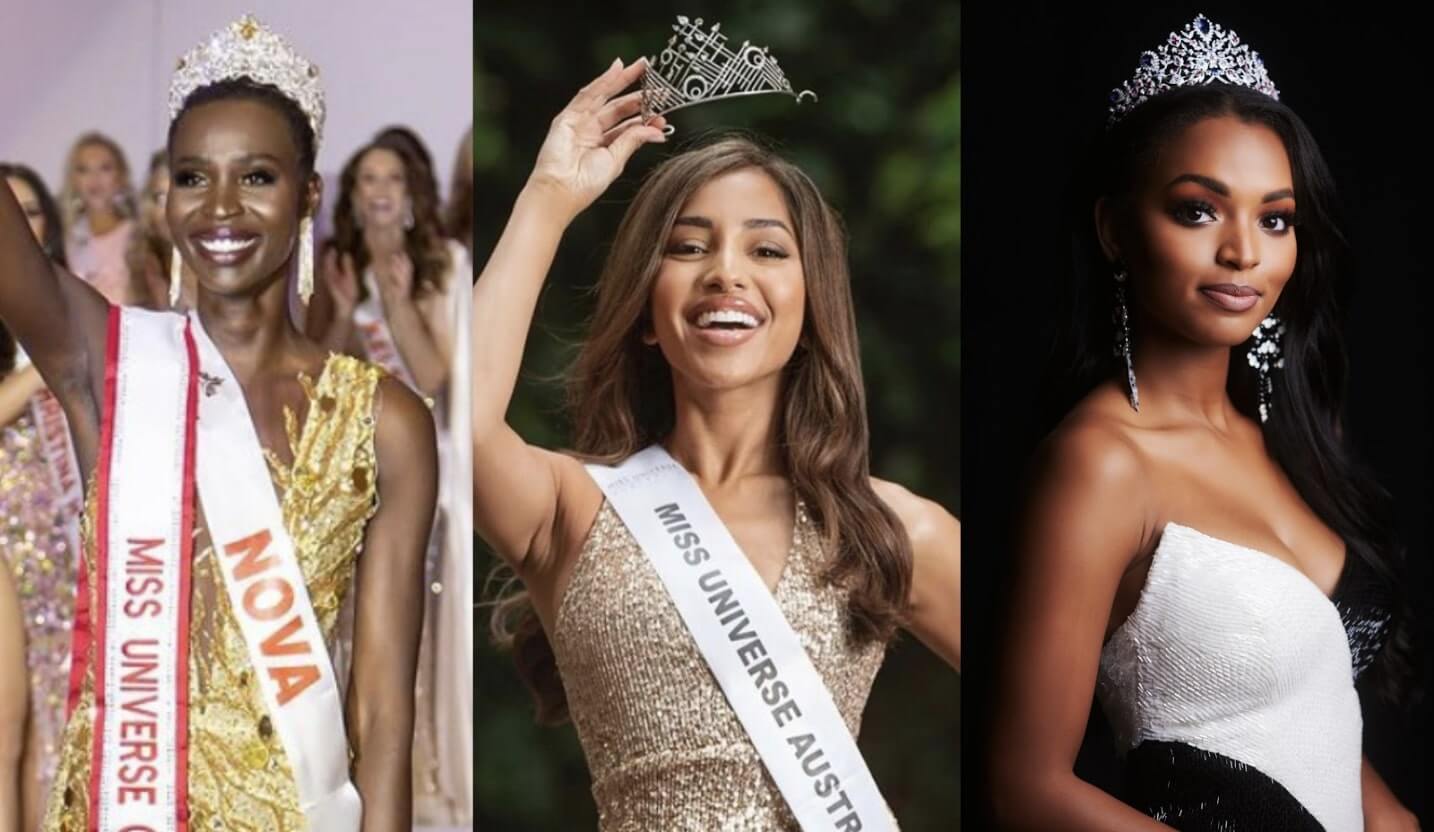 Pageantry Takes a Turn for Modern Times— and in 2021, You Have Accomplished Women of Color to Thank.

In a non-stop evolving industry, it’s smart and activist women of color who have come to further promote change with their platforms.

Do you cringe at that one video of a certain Miss South Carolina and her “everywhere such as,” and “the Iraq” remarks or think that the infamous crutch phrase of world peace is all that’s going for pageants and beauty queens in today’s society? And even if it’s not that; maybe you think girls who compete are doing so under an archaic system of being catty competitors for the crown? Well if that is truly what you think or last remember, it’s time for a mind refresher on pageantry and the evolution it has gone through and still very much is going through.

Since 2015, when organization ownership of The Miss Universe Organization infamously transferred from Donald Trump to IMG Models & Endeavor, the highly anticipated annual Miss Universe competition saw changes in each edition to create a space where women could embrace their platforms sparked out of beauty and talent, and use them for impactful humanitarian or political change. For what felt like the first time ever, the professions that beauty queens occupied were a huge part of what made them look strong and admirable, never how they looked in photographs. For instance, in 2016, D.C.’s Deshauna Barber was the first woman to serve in the army and be crowned Miss USA.

We all saw the South African powerhouse woman that is Zozibini Tunzi take to the stage and microphone of Miss Universe 2019, right? Her viral answer on young girls taking up space in society, and having little black children see their reflection in her, was just the tip of the glorious iceberg that is the 2020s modern era of pageantry. But aside from the Zozi Tunzi’s, Deshauna Barber’s, Toni-Ann Singh’s, and Pia Wrutzbach’s that revolutionized what being a Miss meant towards the end of the 2010s, I’m not here to talk about them. Instead, I’m here to talk about them.

THE NEW ERA OF WOMEN TAKING A STAND WITH THEIR TITLES

Exactly which they are I referring to, you may ask? The three women featured on the top of the page are who they are and for myself and many others in the pageant fandom or just from basic observation, they are the true epitome of what this new age of pageantry is, and the new norms that it boasts. Learn more about the three queens below:

Nova is an activist for movements like Black Lives Matter and uses her voice at home and across her community in Canada to bring attention to many social justice issues relating to the movement. In June of 2020, alongside another fellow activist, she organized the Freedom March which oversaw over 15,000 people protesting at once. This feat of activism and rallying a community is something never seen before by a titleholder but is one of the many conquering moments to admire for today’s stereotype-shattering pageantry. 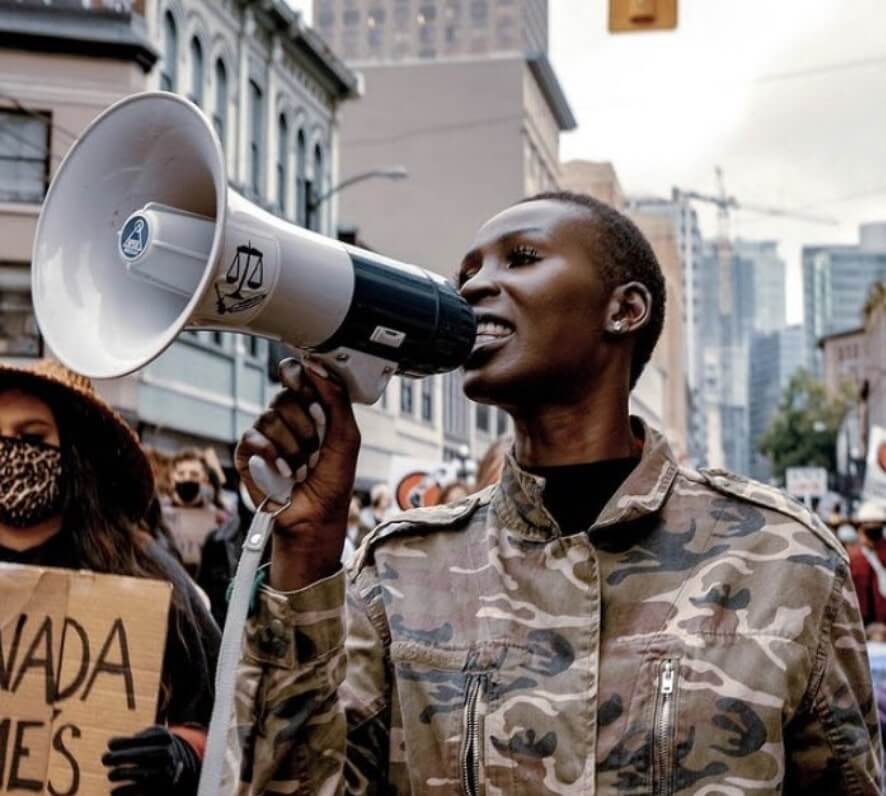 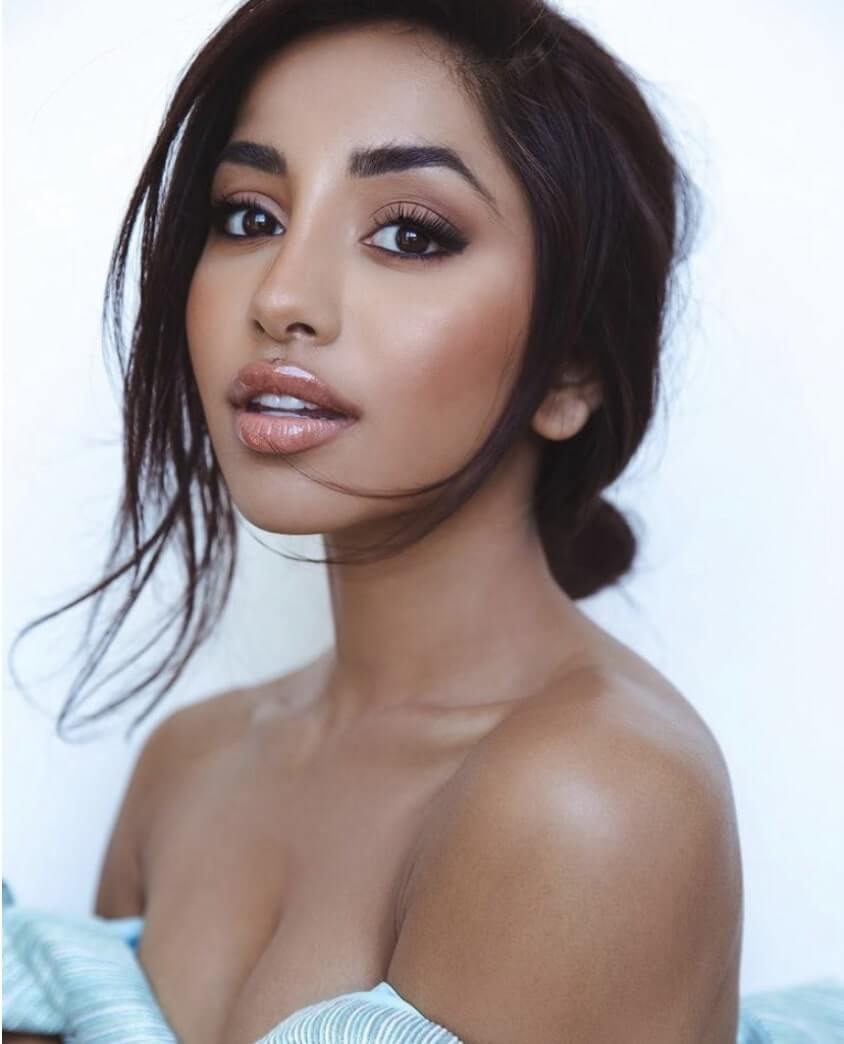 27-Year-old Maria is a first-generation Australian born to parents who immigrated from India. Before winning her national title of Miss Universe Australia and even up to now, she utilized her social media platform to create her Mind With Me series; a judgment-free, ears open space for followers to watch and discuss life topics that aren’t normally brought up in everyday life such as mental health issues that go under the radar during the holidays, or how to take in negative situations and turn them into power.

Maria’s impact on the global community, even in a time of isolation and virtual contact, has been acclaimed as unforgettable and moving. Followers are everyday people that jump into Maria’s moment of speech, and they leave feeling like they finally have found a space to be themselves or simply a new role model to look up to. Having graduated with a bachelor’s degree in psychology and a master’s in management at the University of Melbourne, (not to mention being once invited with a full-ride scholarship to Harvard,) you would expect this accomplished activist and model to know what to say, and she certainly does. Humanitarian and well-spoken voices like hers are the front face of wearing a crown and sash in 2021.

As the first Miss USA to hail from Mississippi, she also is the first Black woman to hold her state’s title twice as Miss Mississippi 2018, and as Miss Mississippi USA 2020. Alongside such monumental achievements for her state, Asya is the 4th black woman to be crowned Miss USA in the last 5 years which goes to show how Black women especially yield a strong fist of power in pageantry. The Southern Belle at heart is a defender of the Second Amendment and a proud criminal justice reform advocate ever since her father was incarcerated at a young age. Her onstage defense of the Second Amendment produced mixed word throughout the pageant world and for viewers across the nation, (see @pageantthreads IG statement for my take,) but it was her strong spoken consistency that kept on bringing her closer to the crown. 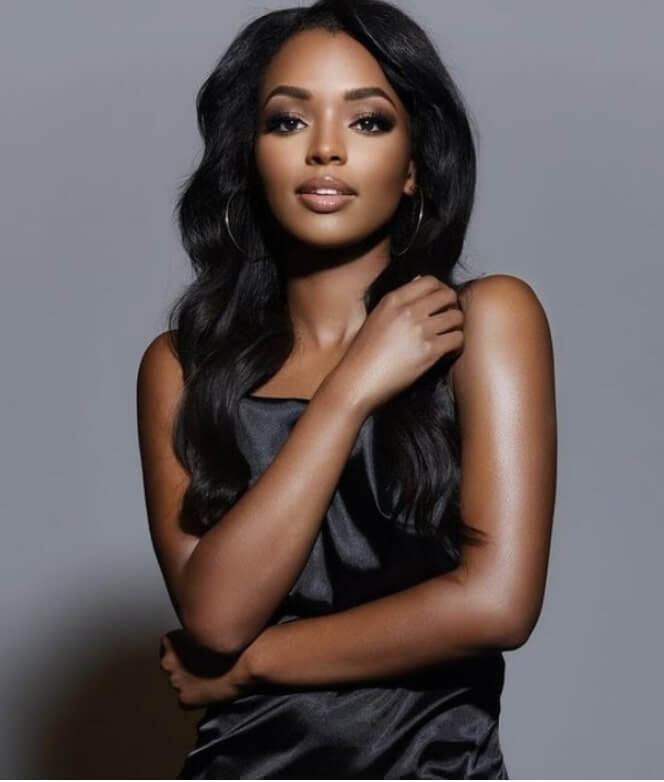 Asya attended summer school at Harvard University at 17 and is currently a student at the University of Mississippi. The Mississippian’s reign will fall under the new leadership of Crystle Stewart as the new national director of Miss USA, which I’ll dive into in a moment.

These three queens are on the journey for the 69th Miss Universe to be held in the spring of this year, and it’s expected that after changes for more opportunities for contestants to speak rather than perform, these three are prime examples of the new trends of high accomplishment and activism to be seen on a global stage like Miss Universe. That doesn’t go to say though that such innovative magic doesn’t happen on a national or local level, because it most certainly does.

AT THE HELM: LEADERS OF GAME-CHANGING PAGEANT PLATFORMS

With this new age of pageantry, (if you can count the many times I have referred to such by now,) comes new management in the form of national directors! Cue in former Miss USA Crystle Stewart of Texas and former Miss Universe Philippines Shamcey SupSup Lee. 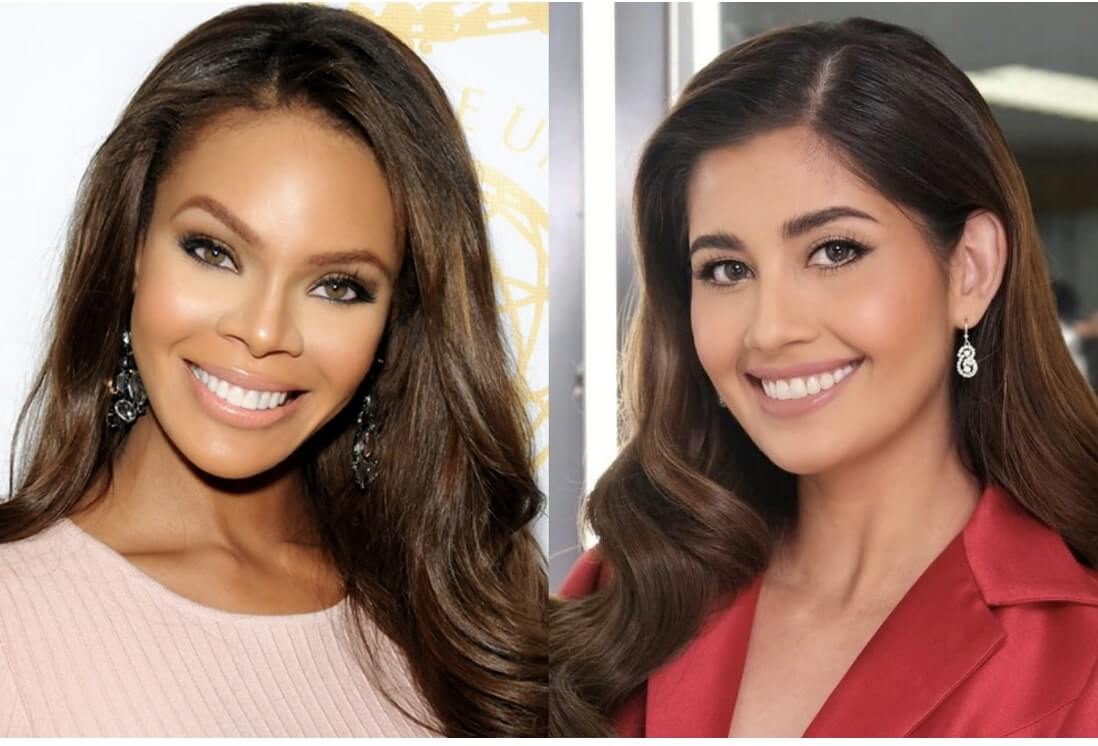 The two boss ladies know what’s up when it comes to the global stage, as they’ve frequented the industry beforehand as national queens who’ve once represented their countries. For the first time ever, Miss USA breaks away from the Miss Universe Organization, and it is a black woman such as Crystle Stewart who takes the wheel. Quoted in an exclusive interview with Good Morning America, Stewart hopes her new role "inspires and influences women like myself of different colors and races, and also men as well, to pursue your dreams without fault and with confidence, go for it and reach higher." Asya Branch is to crown the first Miss USA under Crystle’s wing in autumn of 2021, and I, for one, am very excited about what the Texan beauty has to offer in-store, and for the major speaking possibilities bound to come for the new era of Miss USA. (Not to mention the hopes of anything but… you-know-who worn during the Evening Gown segments)

Parading into the Pacific, Shamcey SupSup Lee takes on the beloved Miss Universe Philippines franchise and after crowning Iloilo City’s Rabiya Mateo, she shows the fans and the international community that it doesn’t take bombshell photoshoots and press to make a phenomenal queen, but rather just someone who is like the everyday woman with a humble voice and soul, because that is just as appreciated as activism and well-spoken demure.

CHANGE HAS COME, AND IT WILL CONTINUE TO DO SO

It’s no secret anymore that from glitz and glamour, there’s a new name to what pageants are in this day and age. From making an impactful statement on stage to making hundreds more on and offline, or speaking to a community the voice you have to offer. I want this innovative mindset in the pageant industry to keep moving forward, full speed ahead. I know I’m not alone in saying that because for the first time there are women who were once labeled as less that are now striding in a field to take the microphone and show others alike that they are more.

Contact Us
45 Lansing Street
San Francisco, CA 94105
Mon-Fri 9am-8pm PST
Sat-Sun 11am-5pm PST
Email: [email protected]
Contact Us
Get to Know Us
BlogJobsDress Directory
Let Us Help You
How It WorksFAQsMake An OfferPartner with Queenly